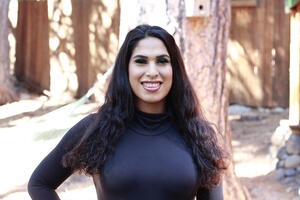 Jessie García Gutierrez is a second-year student in the joint MSW/MPH program.

As we honor Latinx social workers during Latinx Heritage month, the LCOEBH asked Jessie a few questions about her work with Latinx communities and how her identity informs her social work practice.

What part of your Latinx heritage and culture are you most proud of?

I think historically and even to this day we're a really resilient community. I think that sometimes when we go into spaces like higher education, we're taught to not speak up or to just go with the flow of things. Additionally, thinking about how this country views immigrants that are Latine-identified; I think that that is something that we also have to be resilient in and be able to prove that the stereotype is wrong and really be able to prove that, you know, that we deserve to be here, our community deserves to be here, we're more than just a stereotype but also thinking past that. For example, combatting colonization and still being able to withhold the parts of our culture that are important to us. I don't think it was until I was older that I realized how beautiful our culture really is. I left my homogenous city where everyone had the same customs and cultures and didn't realize how it's really beautiful until I wasn't surrounded by it anymore. I'm really proud to be Latine-identified.

Why did you choose to pursue a graduate degree in social work?

I started out as a Masters in Public Health student, but before graduate school I was working at a Transgender Health Program in South Central Los Angeles and I was mainly working with Black and Latina trans women. During the intake process I heard their stories about abuse, discrimination, and harassment that they faced in their home countries and saw how that really affected their mental health and their ability to thrive in this new society that they were entering. I think that was a gap that wasn't really addressed in the [Masters in Public Health] program and it made me to want to be able to provide mental health services for that community so that's what led me to add on the Masters in Social Work. I think being born here in the US, there's that privilege of having citizenship and then also, though this is not a reality for everyone, but like at least in the US there are protections for trans people here so I was thinking about having that privilege and how other members of my community didn't have that privilege and how they've been through so much trauma and I think that becomes apparent in health inequities. I think that's why the MPH and MSW go so well together because of the interplay between investigating health disparities and providing direct services to the community. Ultimately, I want to be able to provide therapy for trans Latine individuals as well as other POC individuals.

As a social work student, how do you hope to uplift Latinx communities?

When I think of working with and uplifting Latine communities I think of holding them in my heart and in my work and you know I think that [my work] is so tied to my identity that it's just natural to me to uplift community and I think in the future always making sure that intentional effort is made to work specifically with Latine community members.

What advice, if any, would you give to a Latinx individual considering a major/career in social work?

Well my undergraduate degree was completely unrelated to social work so it's pretty telling how your undergrad degree doesn't really matter, but I would say do it! I think we need more Latine-identified people working in social work because unfortunately I still feel like there's a gap in the demographic. The community would benefit from having Latine social workers that understand individuals' language, understand their culture, that want the best for them and that come from similar backgrounds is so important. I think it's something that's beautiful and should be highlighted a little bit more. I feel like Latine-identified people are very family oriented — it comes off in our culture, in our interactions with other people — we just treat everyone like family. I think that it translates into the work we do with community so I would highly encourage anyone interested in social work to look deeper into it. I think we need more of us in there, because we're still the minority.

I think there are people here that really want you to succeed, which I think is really telling about UC Berkeley. I've met some amazing people within the school that I totally see being in my life beyond this program and so I think it's important to build that network of social workers and just have that social capital to be able to push yourself and your work further when you get out into the workforce. This place has been very influential in my becoming not only as a social worker, but growing as a person and understanding new perspectives.