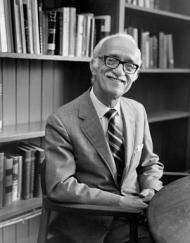 The family story about my great-uncle, Milton Chernin, went something like this: In 1925, when he was accepted at Columbia University, Milton was so young that his mother was going to send him to college in short pants. She was a relative newcomer to America and operating under some Old World assumption that boys were not allowed to wear long pants before a certain age. What that certain age was has changed over the years as a simple tale was mythologized, and Milton the Undergraduate got younger with each telling.

Generally, the teller of the tale was Milton’s older sister, Rose, who purportedly scraped enough cash together to buy her brother clothing befitting a college freshman. By feigning such heroics, Rose found an artful way to brag about her brother and raise Milton’s stature. After all, how important is a Buyer of Pants compared to a Child in the Ivy League?

Milton Chernin would always be the exalted member of his family, even after it was revealed that he went to Columbia at age 15 – young for college but old enough for trousers. And it’s fitting that he held such a position of honor in our family. Here is a short list of his many accomplishments, culled from the UC digital library: He came to Berkeley in 1929 and earned an MA and then a PhD. He taught seminars in criminal justice and became an expert on the state penal system. Near the end of World War II he joined the Army to help de-Nazify Germany and reform the police system. In 1947 he became dean of the School of Social Welfare, where he served for the next 30 years. During and after that period, he was on many Academic Senate committees; received numerous awards, including the Berkeley Citation; served the state and the nation in myriad ways; and still found time to do community service and dote on his wife, Gertrude.

After his retirement, great-uncle Milton became the President of the Faculty Club and was credited with reviving both its spirits and its finances.

That is all part of his public profile. What is less well known about Milton is that he came from an extremely chaotic family. His father and mother, who brought the family to the US from Russia when Milton was a baby, were separated at various times by geography, temperament, and mental illness. They moved, struggled, and splintered, and the children were often left to fend for themselves and one another. Milton lost a twin brother in childhood and later nearly lost a sister to polio. Another sister went to jail over her political affiliations, and a third spent the war, along with her husband and three sons, in an internment camp in Indonesia.

With the death of his parents, Milton became the patriarch to a tribe of serially traumatized immigrants – the distant star around which a family of outsiders orbited.

An obituary I found of my great-uncle, who died in 1987, said that after he became dean, “Berkeley was his second home for the next forty years.”

Actually, Berkeley was his first and, perhaps, only home.

Though it is true that he had a long and happy marriage, doted on his nieces and nephews, and referred to himself as “the senior person present” at family gatherings (Rose having by then surrendered to him even her status as the eldest), everything he did and was emanated from Berkeley. He found, as have so many who have come to this campus from confusing, even hostile places, ideas, principles, structure, and community. Berkeley served as both a map and a compass.

The first time I went to lunch at the Faculty Club, I wandered over to the fireplace, where a couch and chairs create a cozy living-room setting. I looked up, and there was a black-and-white photo of a smiling Milton Chernin, looking right at home above the mantle.  –Wendy Miller