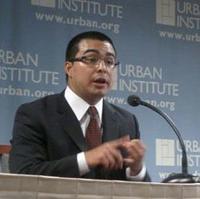 When Javier de Paz (BA '12) moved to the United States at the age of 13, he had very limited knowledge of the English language, and – even more challenging – was separated from his mother, who stayed behind in their native El Salvador. Joining his father, who had arrived stateside before him, de Paz remembers that he was angry for the immense disruption in his life.

“I did not understand my father was actually trying to help our family,” says de Paz. “When my father published his memoirs during my junior year of high school, I finally understood his actions. I had not known that my mother gave birth to me when she was only fourteen; I did not know that I had been born during El Salvador’s civil war in a refugee camp. My father left because 36 of our family members had been killed during the war, so he had no choice but to leave.”

De Paz made the conscientious decision to make the most of his new life in Oakland, excelling in his studies and managing to pick up English while attending his high-school classes. “When you come from a low-income background and you haven’t had the ability to prepare, it’s tough,” he says. “But there’s something about me that I have always been able to ask for help.”

That help has come in many different forms. De Paz credits individuals from the Berkeley campus -- including his EOP counselor and his writing tutor, a graduate from the Goldman School of Public Policy – for connecting him to academic resources and pushing him to improve his writing skills. He also notes that the work he has done with his father’s nonprofit program to support youth has been an important source of inspiration. “In 2007, my father and I organized groups of Oakland students to bring clothing and school supplies to students in El Salvador,” he explains. “Every year since then we have been going back to El Salvador to bring school supplies, clothes and medicine. My passion for social work and providing student services really started with this work with my dad.”

Another of de Paz’s mentors, Berkeley Social Welfare lecturer emeritus Paul Terrell, also encouraged him to apply for an extremely competitive summer internship with the Urban Institute in Washington, DC. “I found out about it a week before the application was due!” says de Paz. “Professor Terrell helped me apply, and I was accepted. The program only accepts 10 students out of 250 applicants.”

As part of his internship with the economic and social research institution, de Paz examined students with “similar histories” as himself – non-English speaking immigrants – and their access to academic support services. He cites his own past experiences of being unaware of the available services and therefore being unable to take advantage of many programs for his passion in researching the issue.

“English-language learners in Oakland are segregated from everyone else,” explains de Paz. “If all of these kids are immigrants or children of immigrants and their parents don’t know about the services available that could help them move forward, they are not likely to go and ask for help. It turns out that English learners are underrepresented in afterschool programs in Oakland, even though those who do participate do better. They learn the language better and are more likely to succeed.

“Those kids in Oakland don’t realize all of the opportunities that are there,” continues de Paz. “They think that life is only about what they have seen in Oakland. I want to inspire them to get out of that violence and hardship. My friends from high school see me a little differently now, and they see college students on a different level, but I do not think we are different. We are all on the same level. They can do it, too.”

In addition to his participation in the summer internship, de Paz completed research on student-support services for English-language learners as part of a larger study being conducted by the state of California. De Paz notes that he wanted to focus specifically on outcomes in Oakland. “It is difficult to get data on English-language learners because no one is counting them,” he says. “Immigration policies make it difficult for individuals and schools to admit the immigrant status of students.”

De Paz returned to Washington, DC to present his findings at a national conference. Although he feels that there might not necessarily be anything “groundbreaking” about his study, he notes that it is “very important to have the issue explicitly studied.”

In addition to completing a public policy minor along with his social welfare major, de Paz eventually hopes to complete a master’s degree in public policy, followed by a doctoral degree in education leadership. De Paz says he is truly grateful for his academic foundation in social work and the support he has found through faculty and colleagues. “I decided to major in social welfare because I had been involved with a lot of social work in the past, and it just made sense to me,” he notes. “When I started here, I instantly felt a sense of community at Social Welfare. I loved my major, I loved the classes and I loved the professors.”

Upon reflecting back at his time in Berkeley, de Paz says he is most appreciative for the “opportunity to come to college,” simply because many of his colleagues with similar challenges and backgrounds are unable to access higher education. “A lot of my friends who started with me at the ESL program when we were in high school – people I was with when I first came to the United States – didn’t graduate from high school, or they have kids, or they are in jail, or they are in gangs, or they are dead,” he explains. “So in a way, I feel like I have this responsibility to give back to my community. That’s why I am very motivated to study support services for students."