Edleson and his co-author, the late Susan Schecter, embarked on an 18-month project to facilitate the development of a comprehensive set of recommendations to improve collaboration between domestic violence organizations, child welfare, and family courts. With federal and foundation funding, Edleson and Schecter worked with a national committee of stakeholders to develop over 60 guidelines for those working with families affected by both forms of abuse. These recommendations were published in 1999 by the National Council of Juvenile and Family Court Judges as Effective Interventions in Domestic Violence and Child Maltreatment Cases: Guidelines for Policy and Practice. 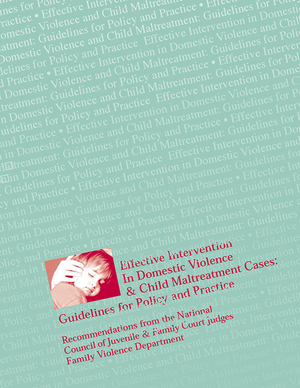 The book — better known as the "Greenbook" due to the color of its cover — had an immediate and widespread impact. Federal funding enabled the creation of six demonstration sites, a cross-site national evaluation, and a technical assistance program for other jurisdictions wishing to implement the recommendations. The Greenbook generated a wave of follow-up articles and sparked changes internationally.

Twenty years later, the Greenbook is Edleson's most-read work. To acknowledge the book's impact, Edleson and Lucy Carter Salcido co-edited a special edition of Juvenile and Family Court Journal in November 2019 to "reflect on some of the remarkable work that has been done since the publication of the Greenbook and show how far we have come in the past 20 years" (JFCJ 70, no. 4, p. 9). With eight articles that look to the future as well as the past, the special edition also highlights areas where more change is needed, including addressing the overrepresentation of families of color in the child welfare system.

The National Council of Juvenile and Family Court Judges also sponsored four webinars this past Spring based on the special issue. The introductory webinar, led by Edleson and Salcido, had over 400 attendees.

Of course, public recognition of the book is only one metric of its effectiveness. More importantly, the recommendations in the book have led to permanent shifts, and are now the norm in many agencies as they seek the best solutions for families.

Amid talk of a Greenbook 2.0, Edleson sees the 20th anniversary commemoration as validating: "The major work of my career has been to study, raise public awareness and change public policy and social work practices around children's exposure to adult domestic violence."