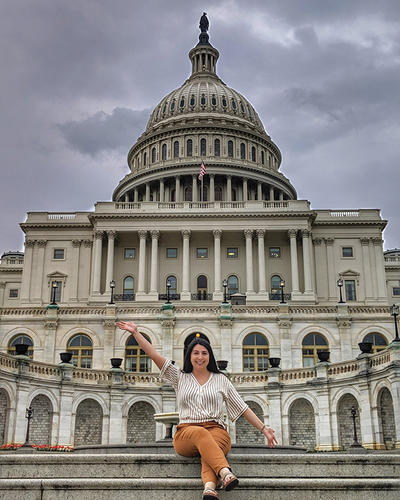 Esmeralda Cortez Rosales (BASW ‘19) traces her commitment to more just, equitable, and inclusive policies to a single life-altering moment. “When I was 10 years old, two police officers came to my house one morning to notify my family that my brother had been shot and killed three minutes away from my house. He was 18 years old. To this day, we don't know who killed him or why.” Three years later her best friend's brother, also 18, was killed, and she began to think of violence in the community as part of a larger pattern. “I didn't want anyone to go through what I and my best friend have been through.”

However, Cortez Rosales's political path didn’t start right away. It took her involvement in IGNITE, a program at her East Oakland high school, to start to draw connections between her lived experience — and that of her community — and local and national politics. “IGNITE really helped me connect the dots,” she explains. When she enrolled at UC Berkeley, she went to work for IGNITE and led the program at her former high school.

After graduating in August 2019, she was offered a job at IGNITE as West Coast Program Manager. IGNITE, which was founded by Berkeley Social Welfare alum Anne Moses (PhD '96), is a nonpartisan organization that aims to boost political participation by women in the U.S., regardless of party affiliation. As Cortez Rosales explains, “if women are half of the population, we should be extremely close to —  if not 50% of —  all elected officials across the country.” With that goal in mind, IGNITE offers programming in schools across the country from the elementary level on up through college.

Since Cortez Rosales manages all college programs in the West Coast states as well as Arizona and Nevada, UC Berkeley’s IGNITE chapter — launched in Fall 2019 — falls under her purview. Cal and IGNITE are a perfect fit, she explains, “because there are a lot of people here who identify with activism and social issues.” She also manages five fellows who are working to found college chapters in other West Coast states, as well as curriculum partners and community partnerships between IGNITE and organizations like Women’s March Oakland. 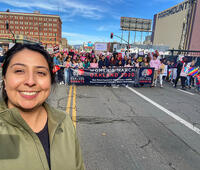 Cortez Rosales stresses the inclusion and empowerment at the heart of IGNITE’s mission: “The people who come through our program don't always have an interest in politics. It's our job to make them understand that the personal is political, and it's our job to teach them that they do have political power. When I first started with IGNITE in high school I didn't care about politics. I didn't know what a mayor or a city council did, or how they work together. But just being in the program, your political ambition starts to grow and grow. That's what's unique about IGNITE. We're not necessarily training you to run for office, but we’re building up that political ambition, because we all have political power.”

She also draws the connection between her political involvement and her time in Haviland Hall. She found that what she was learning in class was instantly applicable to the larger world: “I just loved being here. The Social Welfare major really helped me think critically about every issue that comes through our hands.” Not only did she find her professors’ expertise illuminating, but she valued the mix of experiences and perspectives in the classroom: “The people are great, too. People from all walks of life come into the classroom, and when you have a lot of minds put together, you can create solutions that you would have never thought of.”

"The Social Welfare major really helped me think critically about every issue that comes through our hands.... The people are great, too. People from all walks of life come into the classroom, and when you have a lot of minds put together, you can create solutions that you would have never thought of.”

During this time, she also served with the Oakland Youth Advisory Commission, which brought recommendations to the mayor and city council on issues related to youth. She helped conduct a youth survey in Oakland — including organizing the participation of her former high school — and pushed for greater attention to youth mental health concerns as well as a better understanding of the number and needs of homeless youth in Oakland. Her social welfare studies helped inform her work with the commission, and vice versa. 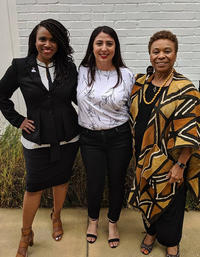 In January 2019, she stepped down from the Oakland Youth Advisory Commission to pursue a different kind of political involvement: she interned in the office of congresswoman Barbara Lee (MSW ‘75) as part of the UCDC program. “One of the highlights was when constituents come into the office who recognize Barbara Lee as a spokesperson for them.” She also valued the connection that Congresswoman Lee draws between politics and social welfare. But her most rewarding moment came when her family visited her in Washington, D.C. and came to Barbara Lee’s office. “It was so eye-opening to see my brother and sister come to the nation's capital, and have them be there with me in that moment just had me holding back tears. We come from East Oakland, we don't really go to the capitol. It was beautiful to be able to show them that their voice matters.”

Cortez Rosales’s desire to speak up on behalf of those who aren’t always heard has not stopped with her work at IGNITE. She is also currently running for the Oakland City Council in District 7, which includes East Oakland and the airport area. When she asks District 7 residents what their priorities are, many of them mention illegal dumping and potholes. People don’t even mention crime, she explains, “because it's so normalized for us to have people being shot or killed or being robbed that we don't even mention it. It’s not seen as fixable.” Cortez Rosales is juggling the challenges of running for office while also working full time, but she is committed to being a voice for housing and jobs in her hometown. “I believe that we should all have opportunities to be able to succeed in Oakland.”

“I think It's really important to go in with your truth and your reality and your story. Because that's what moves mountains at the end of the day.”

One thread running through her story is a belief in the power of example. Cortez Rosales explains that after she graduated in August, as a first-generation college student she was eagerly awaiting her diploma in the mail. When her mail carrier handed it to her, she began to cry. “[The mail carrier] asked, ‘What is it? What is it?’ and I said ‘It's my diploma. It's my degree. I just graduated from UC Berkeley.’ She was so excited. Then a couple of days later the mail carrier came by again and said, ‘I forgot to ask you: what did you get your degree in?’ and I said, ‘Social Welfare.’ And she just looked at me and said ‘Great. We need more people like you.’”

The world does need more people like Esmeralda. We look forward to seeing what she accomplishes next, and how many people she helps empower to find their voices. As she puts it: “I think It's really important to go in with your truth and your reality and your story. Because that's what moves mountains at the end of the day.”