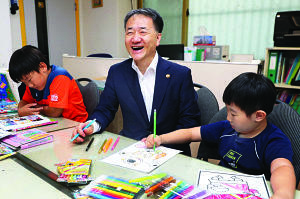 Dr. Park Neung-hoo, Minister of Health and Welfare of South Korea, has been selected as the recipient of the 2020 Elise and Walter A. Haas International Award. UC Berkeley's Haas International Award Committee bestows this award annually to a Cal alum who is a native, citizen and resident of a country other than the United States, and who has a distinguished record of service to his or her country.

Minister Park, who earned his PhD from the School of Social Welfare in 1998, has spent a career in public service dedicated to the creation of what he calls "an inclusive welfare state" in South Korea, one in which a basic standard of living is guaranteed for all. For the past 15 years he has helped shape South Korean policies on issues such as aging, minimum wage, and social security.

As Minister of Health and Welfare since 2017, he is responsible for overall welfare policies covering the areas of labor, social services, and the environment. He helped develop South Korea's Basic Livelihood Security Program and expand the nation's National Health Insurance program. "It is my goal to introduce policies promoting community-based care so that vulnerable population groups, such as the elderly and persons with disability, can access services they need while actively engaging with people in their communities," he explained in a 2018 interview. In recent months he has received widespread acclaim for his leadership of South Korea's response to COVID-19, globally recognized as a model for effective containment of the virus balanced with respect for civil liberties.

In her letter announcing the award, Chancellor Carol Christ affirmed "the university is very proud of your introduction of policies promoting community-based care so that vulnerable population groups, such as the elderly and persons with disabilities, can access services they need while actively engaging with people in their communities. These contributions to South Korea exemplify Berkeley's highest values."

Says Minister Park, "the six years that I spent at UC Berkeley from 1992 to 1998 gave me one of the most precious memories I cherish until today. The time I spent at the University has become a firm foothold to shape policies such as those for "an inclusive welfare state" and community-based care."

Instituted in 1964, the award has been given to 50 previous recipients. Minister Park is the fourth recipient from South Korea. He joins former Executive Vice President of Korean Air Choong Kun Cho, who received the award in 1982, former Chancellor of Yeungnam University Joon Lew in 1986, and 1994 recipient Han Sung-Joo, the former Minister of Foreign Affairs of the Republic of Korea. He is also the second graduate of Berkeley Social Welfare to receive the award: Mu Sochua (MSW '81) received the award in 2006 for her ongoing activism in Cambodia.

Chancellor Christ will present the award to Minister Park at a virtual ceremony on October 8, and he will give an online talk during Homecoming and Parents' Weekend October 16 – 18.

Says Dean Linda Burton, "Dr. Park embodies both the global reach of Berkeley and its commitment to improving the human condition, and we are proud to see him recognized for the Haas International Award."