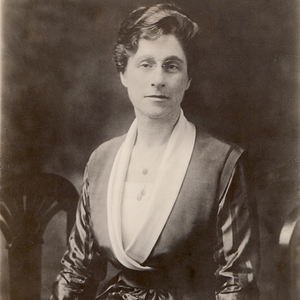 Jessica Blanche Peixotto is credited with being the founder of social welfare studies at Berkeley. Her family’s story can be traced back to the time when Christopher Columbus was setting off for the New World. On the Iberian Peninsula in the late 1400s the Inquisition was in full swing. One Jewish family set off from Portugal in 1492 in a different direction. Their decision would set in motion cascading migrations that would end four hundred years later with an American-born descendent, Jessica Blanche Peixotto, becoming a nationally-known Berkeley faculty member.

I only came to know of Jessica after picking up her mantle as Dean of the School of Social Welfare. I wondered how this predecessor of mine shaped our School and field over 100 years ago. She walked the same campus pathways that we do today, over creeks and through redwood groves but she lived in a very different era.

Six-year-old Jessica, her mother and a two younger brothers came to California to reunite with her father via ships and, before there was a canal, by an overland train connection on the Panama Peninsula. Her father was an early employee of Levi Strauss, a merchant in his own right and a long-time president of Temple Emanuel synagogue in San Francisco. Jessica’s father didn’t believe that girls should get an education beyond high school so she persisted for 11 years after graduation by studying with tutors at home. Finally she convinced her father to let her enroll in 1891 at Cal as a special student in non-degree studies. She eventually did earn her Bachelors degree in 1894 and went on to be only the second woman at Berkeley to be awarded a PhD in April 1900. Supervised by the world-renowned historian and political scientist Bernard Moses, her dissertation was a comparative study of the French Revolution and modern French Socialism. Jessica spent a year in 1896-7 at the Sorbonne in Paris engaged in her dissertation research, accompanied by her artist brother Ernest. Her cousins included the poet Emma Lazarus and Anna Nathan Meyer, the founder of Barnard College.

A few years after completing her doctorate Jessica was hired in 1904 as a lecturer by Berkeley’s President Benjamin Ide Wheeler to teach a course in Contemporary Socialism. In 1907 she was promoted to a junior faculty position and added a course on the Control of Poverty to her teaching portfolio. By 1917, in the midst of the First World War, Jessica helped establish the first training for social workers in California that paved the way for a new graduate credential in social welfare in 1917-18 located within the Department of Economics.

In 1918 Jessica broke through another barrier by becoming the first woman at the University of California to be promoted to full professor. Today her portrait hangs in a corner of the dinning room of the Women’s Faculty Club on campus that she helped establish when women were excluded from the existing Faculty Club.

Jessica was in many ways a model of a woman who persisted and pushed through many glass ceilings in her lifetime! She challenged her father’s conventional wisdom that higher education was not for women. Likewise, today the majority of our Social Welfare students come from under-represented communities that have long been excluded from higher education, with many being the first in their family to attend college. They too are persisting and challenging conventional wisdom.

Jessica and her women colleagues also established new areas of study and teaching in economics. She established, with her colleagues Lucy Ward Stebbins and Emily Nobel Plehn, a field of “social economics” that they called the feminine form of political economics. She published studies on living wages for a variety of workers, including faculty, and taught courses on social welfare. While I doubt Jessica thought of herself as a social worker, she was a scientist who brought the emerging methods of social sciences to bear on the well-being of workers, families and children. She served on several statewide and national child welfare boards and spoke frequently on social wellbeing using data she gathered in her studies. In 1928 she was elected vice president of the American Economics Association, attesting to her national reputation.

Jessica’s scientific approach was novel in her time. But her approach has had a significant influence on our School over this past century. Following Jessica’s lead, our faculty continues to establish itself as leading scholars and public intellectuals who challenge conventional wisdom and work to develop evidence to inform better policies and practices in social welfare. Jessica’s own life’s work established the foundation for Berkeley Social Welfare and her priorities echo today in the halls of  Haviland as her legacy of practicing science for the common good continues to differentiate our School from many other social work programs.  Jessica Blanche Peixotto retired from the University in 1935 and passed away after a long illness in 1941 at the age of 77.