Message from Dean Burton: What is your North Star?

I hope that you are all doing well and staying safe and healthy.

I have missed you. I attempted to write to you on many occasions this month, but duty called in a multiplicity of ways that stalled my efforts. In addition to addressing the needs of each day, I, like a number of our community members, lost several kinfolks and life-long friends due to Covid-19 and other prevailing situations. Of the losses I experienced, the most profound was one of my very best friends, Dr. Jerome Williams, who happened to be an extraordinary social justice warrior. Jerome and I started our academic careers together at Penn State as the only African American assistant professors in our respective departments. We also both had big young families — he and his amazing wife, Lillian, had five children under age nine, and I had four under age seven. Indeed, those were interesting times!

I mention Jerome and Lillian because of what this amazing couple contributed to the career development of hundreds of aspiring African American scholars. As the first African American in this country to receive a PhD in marketing, Jerome was the key visionary in creating the PhD Project — a national mentorship program for young African American academics and practitioners in the field of business. This program has been called a "North Star" by many as it became a beacon for participants in finding purpose in their careers and in making a difference in this world.

Given that Black History Month ends today, I am particularly mindful of the symbolic meaning of the North Star for many African Americans. For example, in 1847, Frederick Douglass established the abolitionist paper The North Star and developed it into the most influential black antislavery paper published during the antebellum era. It was used to not only denounce slavery, but to fight for the emancipation of women and other oppressed groups. The North Star title was a reference to the directions given to runaway slaves trying to reach the Northern states and Canada. As Black History informs us, slaves were able to find their way using the North Star as a guide. The North Star was considered a beacon to true north and freedom. 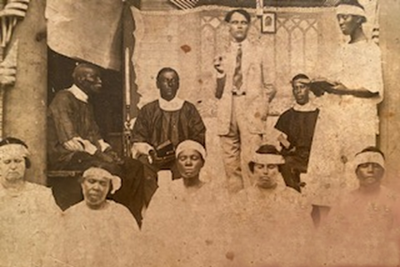 My paternal grandmother, Mary, featured on the platform with the preacher and deacons of the church below, taught me quite a bit about the North Star. She was the granddaughter of slaves (my great-great grandparents) and counseled me daily when I was a child on the importance of finding my North Star. It took me a while to find it, but I eventually did on a cloudy Tuesday morning in Pennsylvania not long after I had met Jerome and Lillian. On this particular morning I was going to my field site in Harrisburg to conduct interviews about teenage childbearing with a young African American mother and her mother. Before I headed out on the l00-mile drive to Harrisburg, I stopped by Jerome's and Lillian's to chat about my concerns in doing the interview that day. I knew it was going to be a tough interview. I recall talking with them about being tired, frustrated, and perhaps not being "on it" enough to listen intently and read the context well. Jerome said to me, "Go. Today you may find your North Star."

He was correct. During the interview, the 5-year-old daughter of the young mom I was interviewing crawled under the table and laid her head in my lap. At one point she looked up at me and smiled. She was so tiny... and so very frail. She had the physical stature of a two-year-old.

She fell asleep under the table with her head in my lap. She slept for four hours as I listened to her mother's and then her grandmother's life stories. When she woke up, she crawled up into my lap, hugged me around my neck, smiled, and then quietly said "thank you." She then got down and walked into another room as her grandmother continued to talk, never acknowledging her granddaughter's interaction with me.

As I wrote my fieldnotes after the long drive home that night I realized that being in that context, hearing about the complex lives of a mother and her daughter, and providing a respite for a little girl who was in need and invisible to her family was my North Star. While the story is more complicated than I can share in this email, I will just say that this family showed me the way, the truth, and the light that would guide my commitment and efforts to shaping research, practice, and public policies to improve the lives of disadvantaged children.

So, now after hearing about Jerome, Lillian, my grandmother, and my little angel, I ask you on this last day of Black History Month, "What is your North Star?" What guides your purpose?

As we close the 2021 Black History Month, let us celebrate the many African Americans who have followed their North Star and through their efforts have contributed to the well-being of all. Have a great evening!