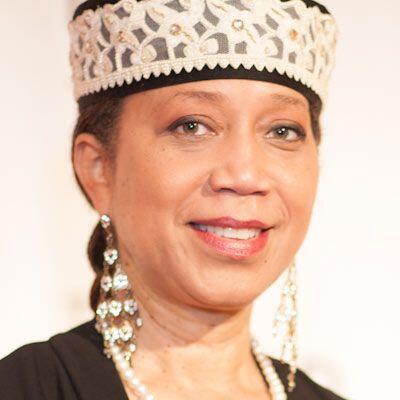 A producer, writer, and diplomat who has spoken throughout the United States, Europe, Africa, Central America, and the Caribbean, Shabazz has served as Ambassador-at-Large to Belize since 2002. She has spent over 35 years offering keynote addresses while developing curriculums and programs for educational institutions, executive forums, diplomatic networks, penal systems, conferences, and human service organizations globally.

Dean Linda Burton, who has known Ambassador Shabazz for a number of years, introduced her as "an incredible mentor, and as a beacon of light for many," praising her investment in building relationships and community as a tool to create social change.

Entitled "Yesterday, Today, and Tomorrow: In Pursuit of Inclusiveness and Social Justice," the ambassador's talk touched on a number of topics relevant to social workers and anyone working towards social justice.

Ambassador Shabazz talked about her ongoing role as an educator and mentor, including her current work with youth in Louisville. In the city where Breanna Taylor was killed, she recognized the possibility for younger people's idealism to be at stake as the killing remained unresolved. Her civic fellowship aimed to build an understanding of "what really goes on and who's really responsible, so that when we are frustrated we're not expending energy in a direction that cannot give you the answer." Working with these 16- to 22-year olds was so energizing that the fellowship will be extended. "I can't stop now," she said after a 12-hour day with her students.

She stressed the need to focus on long-term outcomes and for young activists to sustain themselves for the long haul. "Can't stop doesn't mean you don't have permission to pause."

When asked what advice she had for social work students, she again highlighted the importance and taking care of oneself in order to be able to take care of others. Personal fortification is all the more important in the wake of the death of George Floyd, which she referred to as "an explosion of heartbreak that resided on the fault line of the ever-present, unresolved ache."

In a climate where the best and the worst of human nature are on display, Shabazz emphasized her personal willingness to work with anyone who is ready to move forward. "I don't think we spend a whole lot of time right now with those who are resistant to it. It depletes those of us who want to make a difference. [I'm working with] anyone willing; that's where I focus my time without judgment in the journey of transformation."

Shabazz also described fond memories of growing up in "a really gentle, funny, family environment," stressing that her family had instilled a strong sense of culture and origin. Describing her father's stories about Frederick Douglass, Cinqué, and Ida B. Wells Barnett, she explained "I learned about people that looked like me, and I was never told about the shortcomings of their lives, but rather the triumphant characteristics of their lives." She also credited her mother's strength — especially as a young widow with six daughters — in helping build her "foundational heartbeat" and a strong sense of personal agency.

The ambassador reminded students of Berkeley's extensive legacy of activism. "Berkeley was a standard bearer... Today's [Berkeley students] have to understand the legacy that they walk around with. What are we going to do with that gift? It is a treasure chest from your campus. Are we going to let it be idle? Or are we going to utilize it, get inspired or moved by it, protect it?"

Ambassador Shabazz was the first of a series of speakers on issues of race and social justice who will address Berkeley Social Welfare students this fall. Future speakers will be announced as they are confirmed.