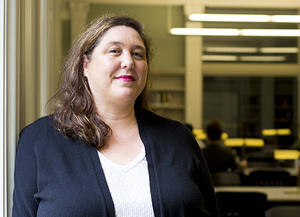 Ella Callow, this year's commencement speaker for Berkeley Social Welfare, has spent her career tackling one of the central questions of inclusion. "How do barriers impact the well-being of individuals with disabilities? And how can the system better serve these families so that we're being true to our mandates as an inclusive society, and also so that we have the benefit of the contributions of these individuals and families?"

In her role as UC Berkeley's ADA/Section 504 Compliance Officer, she is responsible for ensuring campus compliance with federal and state regulations as well as University policies pertaining to access and inclusion for people with disabilities. But when she assumed this role in Fall 2018, it was the continuation of a story that began in Haviland Hall.

As an undergrad at Cal, Callow had a double major in Native American Studies and Social Welfare, and Mary Ann Mason's child-centric approach to social welfare inspired her to combine those two interests. With the encouragement of Mary Ann Mason and another faculty mentor in Native American Studies, Patricia Penn-Hilden, she enrolled at Berkeley Law in order to bring a legal perspective to her work on child welfare.

Not long after earning her JD, she went to work at Through the Looking Glass, a Berkeley-based nonprofit that supports families where either the parent or the child had a disability. Through the Looking Glass had long been a resource for questions about adaptive baby equipment — like using a desk as a wheelchair-accessible changing table. With federal funding, TLG became the first National Center for Parents with Disabilities and Their Families. As their Legal Director, Ella provided the expertise that allowed them to address the heartbreaking calls that they received from parents who had become involved with the child welfare system solely because of a presumption that their disability was detrimental to their child.

"People would call and say 'I'm blind and they've taken my baby,'" explains Callow. "Or 'I have cerebral palsy and someone called Child Welfare on me and they've taken my kids away.'" Often, dependency statutes allowed a court to reach the determination that a parent was unfit on the basis of disability. Sometimes there were allegations of abuse or neglect, but in many cases a parental disability was the sole reason for a family's involvement with the Child Welfare system. In some instances, parents were unable to comply with court mandates because of accessibility issues: blind parents might be required to watch parenting videos, or a wheelchair user might miss a hearing or appointment because it was on an upper floor in a building with a broken elevator. Instances of discrimination were even more common if the parent had an intellectual or psychiatric disability.

Ella was able to provide guidance about parents' legal rights and effective legal strategies under these circumstances. Given the national scope of these issues, she also became a litigation consultant for the Disability Rights Section of the Civil Rights Division in the U.S. Department of Justice. She was a primary author of the National Council on Disability's 2012 report "Rocking the Cradle: Ensuring the Rights of Parents with Disabilities and their Families," which outlined the pervasive bias against parents with disabilities and made recommendations for legislative changes. Partly as a result of this report, in 2015 the Department of Justice issued guidelines that specified that the ADA applies within the context of the Child Welfare system, and parents have a right to reasonable services and accommodations at every step of the way.

Callow describes her work with the Department of Justice as a rewarding opportunity to enact change on a structural level. "When the federal government has already identified that a state system — whether it's a child welfare system or a court system — is struggling to meet the minimum requirements of the law, then we can look strategically at how they can change policies, practices, and protocols around training, staffing, service delivery and what services they're building into their communities through funding."

In 2017, Callow was hired as Disability Services Specialist for the City of Berkeley. As an early adopter of accessibility practices, the city had a long-standing dedication to accessibility and inclusion, but practices that had been pioneering for their time now need to be updated for 21st-century norms like digital communications. Callow found satisfaction in laying the groundwork to create a new transition plan: "it was a really rewarding process to prepare them to be leaders going forward in the next century."

Like the City of Berkeley, UC Berkeley was at the forefront of the independent living movement. Callow often notes the almost 100-year tradition of UC Berkeley producing brilliant disabled public intellectuals like Jacobus ten Broek, Ed Roberts, Judith Huemann, and Victor Pineda. And like the city, the campus faces challenges in modernizing an aging physical infrastructure, continuing to keep pace with technology, and moving beyond physical accessibility towards an equitable campus experience for individuals with disabilities. The definition of accessibility has evolved considerably since the independent living movement began here 50 years ago, and there is an ongoing need for more resources and more support. Says Callow, "we continue to work on removing physical access barriers, and we're also working to remove barriers in programming — not just the academic programming, but programming for staff, faculty, and non-affiliates. How do we make their participation most possible? And how do we make sure that we're benefiting from all they have to contribute?"

While the work of inclusion is never done, Callow highlights how much ground has already been covered: "Today's UC Berkeley is something Ed Roberts and his cohort could only dream of in the 1960s: that 3000 [students] with disabilities across a broad spectrum would be on this campus doing what they wanted to do, getting an education and being part of a larger academic community and a local community. And so making sure that we're serving everyone is a challenge, but it's also an opportunity to be part of the incredible, ongoing story of disability and Berkeley."

We are proud to welcome Ella Callow back to campus, and honored to have her as commencement speaker in Spring 2019.