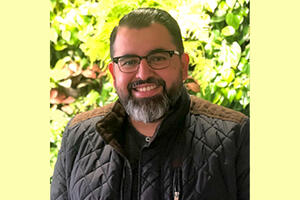 Sergio Serna, who joined the Field faculty this fall, is a licensed clinical social worker who has dedicated his career to working children and families engaged by the public child welfare system.

As we honor Latinx social workers during Latinx Heritage month, the LCOEBH asked Sergio a few questions about his work with Latinx communities and how his identity informs his social work practice.

What part of your Latinx heritage and culture are you most proud of?

I am the proud child of immigrants. My parents are from Mexico. I consider myself to be Mexican American or Chicano. That's the political space that I grew up in. When I think of the word Chicano, versus Latinx in particular, it is a more specific representation of who I am as a Mexican American and a child of immigrants. I am first generation born here in the United States. And like many others, I owe everything to my parents; I love my parents, I love how hard they worked.

When I think about the Latinx culture, I think of the similarities in our stories. Immigrant parents, parents working long hours. It's not unique that my parents couldn't help me with my homework, or that my siblings and I served as translators from the moment that we could read and write. That is such a common experience. It's something that makes me feel proud, to see my people transcend what others think it is to be a person of color, an immigrant, a child of an immigrant or Latinx, or Mexican. I'm so proud to be part of a group of people that care so much about the basic unit of family; I'm so proud that we come from a collectivist society where we care about our families. It feels so common, but it's really special. It makes me feel like I'm not alone, in a world that can be so othering. I started as an undergraduate at UC Berkeley in 1997 when Pete Wilson put an end to affirmative action in the UC system. Our numbers plummeted. There wasn't a lot of us here on campus to begin with. We were 15, maybe 20% at the time. And then we dropped to the low double digits. Black students dropped to single digits. It was frightening to be in this space and to feel so unwelcomed. I remember during that time feeling so alone and taking a Bart ride to San Francisco's Mission District and finally hearing familiar sounds and smelling familiar smells. I walked by a panaderia and I thought, this is what I've been missing. I felt like I was home at that moment.

The feeling of being part of this community is really something, considering all the rhetoric and hate that has existed historically, in the US and has more recently surfaced so forcefully about our people. I have no desire to retreat from that. If anything, it's made me want to embrace that more. It's particularly special, to be part of the Latinx community, in a space where there aren't a lot of people like us, and how our mere presence can be welcoming to others. It's so important to have a feeling of belonging especially at a University level. When we talk about what it is that keeps students from matriculating. It's that very thing... feeling like you belong. When you're in an unwelcoming space, you can go one of two ways. You can decide to retreat from the space or prove somebody wrong. I've always leaned more towards proving somebody wrong, but its an uncomfortable space to live in.

How were you introduced to social work?

I didn't know that I wanted to be a social worker. If you were to ask people that knew me before I went to Berkeley, they would have said, Oh, this guy's gonna be a lawyer, or a business person. I still entertain the idea of law school because I've worked so much in that space as a social worker. But 9/11 happened months after I graduated from Cal. I was working at a fancy consulting firm, living the dream, living in the Bay Area with enough money to actually enjoy living here. But 9/11 created so much turmoil in the world and for me internally, I credit these events with the awakening of my social consciousness. I had South Asian and Middle Eastern friends who were suddenly being looked at a certain way after the attacks and we were in BERKELEY! In the months following the attacks, I felt like I could continue on that path that I was on or do something more meaningful. I remember waking up one day and thinking, today's the day I'm going to quit. And I went against everything my parents have ever taught me. My dad has always been very conservative, always told me, "Don't quit your job until you have another job waiting for you." But I felt happy that I was leaving. I started working in after-school programs in Richmond. There was a Latinx community there, but they were sort of hiding. I don't know how better to describe it than that. So I was working in this community center run by the YMCA. All the staff and kids were black, except for me. I remember the first time a Latino family saw me there, and they walked by and I could tell they were wondering whether this was an okay space for them to be in. And they were like, is this a safe space for us? And I was like, yeah, come, bring your kids, tell your friends. Eventually, things started shifting a little bit with more Latino families coming in, which was amazing. During my time at the YMCA, the director at the site saw that I was struggling, not knowing how to move people forward or understanding how to partner with them to achieve something more. He had an MSW. I didn't even know what it was, and he sat me down, and we had a conversation and he told me I should go to Social Work school. I had to figure out what that meant so I did a little bit of research and within a year I had applied and gotten into an MSW program and I was on my way to becoming a real social worker. I'm super thankful for him. It's funny, sometimes you don't realize that people move you in a certain direction until you reflect on it later. And it was not till later that I realized that a simple conversation really changed the trajectory of my life.

In your role as a social worker, how have you uplifted Latinx communities?

I've worked my entire career, especially as a professional social worker, intentionally with the Latinx community. I've been a social worker now for 15 years. When I worked at the county, I provided services directly in Spanish. I worked in San Diego with a community that was newly immigrated to the United States. I think having someone that spoke their language was so important. Again, it feels so simple, so basic; everyone deserves this. It made such a difference for me to understand their culture and to be able to advocate for somebody in a way that someone else could not. When someone sees you, someone understands the niceties, the respect that exists in our community, that's so important. It's showing somebody the respect that they deserve, regardless of their station, or where, and how they're interacting with the system. I worked a lot with Central American families. So I had the privilege of learning about the culture, which at times felt so different, and the language, and the food. People think Latinx and they think it's one singular thing, which it's not. I was talking to families about things that I never talked about in my own house growing up: sexual abuse, domestic violence, mental health. It was a privilege to be able to make these topics no longer be taboo, and have it be an open conversation and have a parent sit across for me shocked that I would say these words, but then later see them gain a certain level of comfort with it and an ability to talk to their kids about it. I grew as a person, I grew as a social worker, being in that space, sharing space with people in that way. I've learned so much.

And then coming back into this academic space was purposeful too. As a field faculty, I'm always thinking about how I can create a space where someone's going to feel less alone. As I reflect on my career, it's a beautiful thing. When my name or my surname, or my brown skin can serve as a reassurance to someone who's in a stressful situation or being entering a system that is foreign to them or even those who are at an institution that wasn't designed for someone that looks like them. I think that's really the point of why I'm here. That's what wakes me up in the morning. That gets me out of bed knowing that I can help people feel more welcome.

What advice would you give to a student who is considering social work as a career?

I have so much advice to offer; I wish my office was on the main floor so that everyone could walk in. I would say to Latinx students, "your community needs you." I use the word community, in the largest sense of the word. When I think about the spaces that I fit into or didn't fit into, I was still able to find a community or to provide a community for others in those spaces. That's where people need you the most, in these areas where not everybody looks like you. There's always someone who needs to hear a friendly word, a familiar language, someone who understands or can begin to understand part of their culture. It's not something that you can learn in a book. You might become more skilled at that after years of interfacing with communities. But there's an ease to it if you happen to be part of that culture. I would tell students, "you're needed to advocate and partner with other people of color, and help raise the voices of those that are seldom heard." There are so many people that need you to use your privilege for them. And I think it's our duty to do that. It shouldn't even be something that we think about.

What else do you want to share about your career?

I feel like I still have a lot of years left in me. It's funny to say that and even though I have been a social worker for 15 years. It feels like I just graduated, it feels like I still have all that same energy to partner and to have an impact on others. I have done so many different things as a social worker. I've been a therapist, a child welfare worker, an advocate for families in legal settings. I also worked at a law school, and at Social Work schools. I'm still figuring out how to continue to be of service to others and I think that's the fun part.