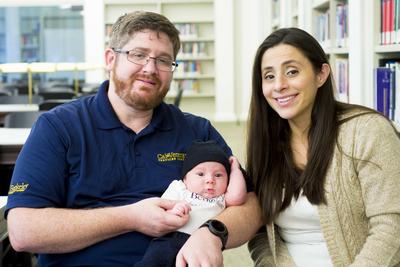 Student veteran Matthew Smith (BA '18; MSW '20) made the decision to become a social worker in the aftermath of a friend's suicide. If the Veterans' Administration had been able to give his friend the opioid painkillers he OD'd on, Smith wondered, why had they not successfully connected him to behavioral health resources? "I got so full of grief and anger," explains Smith, "I decided that day to get involved and I started volunteering with different veterans' organizations in the community." Eight years later, Smith is a graduating MSW student with a focus on behavioral health for veterans. Along the way, he has helped improve conditions for student veterans at Santa Rosa Junior College, at UC Berkeley, and elsewhere in the UC system.

Smith enlisted in the Marines in the wake of 9/11. He thought he would be fighting the Taliban or al Qaeda, but was deployed to Iraq, where his unit saw heavy fighting in Fallujah. "In my unit we lost 33 killed in action and close to 500 wounded. Everybody I know was wounded," says Smith. He suffered a serious knee injury, and after surgery in the U.S. he was considering a medical separation from the Marines. Then he learned that his unit was being sent to Haditha, a town where the bodies of American Marines had recently been desecrated, so he volunteered to return to Iraq. Haditha soon became the site of a massacre of civilians by U.S. troops. "I got to see the horrible side of war, and what it does to people who you would consider your friends, people you think could never be capable of doing horrible things like that." He became even more disillusioned when the leadership attempted to cover up these atrocities, and he left the Marines.

Smith returned to his hometown in Atlanta and found work as an electrician. But when the recession hit, jobs became scarce and eventually Smith found himself living in his truck, struggling to afford food for himself and his dog, and increasingly turning to alcohol to help him sleep as he grappled with undiagnosed PTSD. One night, after drinking a full bottle of Jack Daniels, he decided to shoot himself, but passed out before he could act on his decision.

The next morning he called a friend to take him to a VA hospital, where he sat down with a social worker. "When you go see a doctor, they ask you where it hurts. But the social worker asked me 'Are you sleeping at night? How much are you drinking? Are you connected with your family and friends? Do you have a job? Housing?'" Smith got connected to services and began to get treatment for PTSD. A few years later he moved out to Santa Rosa, where he was living when he got the news that his friend had followed through on suicide.

"I got so full of grief and anger. I decided that day to get involved and I started volunteering with different veterans' organizations in the community."

As he looked for ways to help veterans who were struggling, Smith thought of the social worker who had helped him at his darkest time. He was initially daunted by the idea of pursuing a graduate degree — "I nearly dropped out of high school" — but soon enrolled at Santa Rosa Junior College. Working at the Veterans' Center there, he quickly discovered that some of his fellow student veterans were struggling. He began checking in with people, asking the questions that the VA social worker had asked him — and in some cases offering to drive people to the VA — but quickly moved from helping individuals to trying to improve systems. He started advocating persistently with the president of the college and the board of governors. By the time Matthew Smith transferred to Berkeley, he had helped bring about improved study spaces at SRJC's Veterans' Center and an on-site social worker two days per week. Smith explains why these support systems are so vital: "One-third of the people who have served since 9/11 go college. The majority of them have to start off in a junior college, and that's where we're losing them. But when a veteran has a support system in place, they have a higher graduation rate and completion rate than their civilian counterparts."

At Berkeley — which he chose in part because of its Veterans' Center — Smith settled in as a Social Welfare major. His commitment to helping others came to the forefront again when the Tubbs fire roared through the North Bay in October 2017, devastating neighborhoods and displacing thousands of people. Smith spent most of a week volunteering at evacuation centers. He brought needed supplies, he cleaned bathrooms, and he helped improvise an exam room for evacuees who needed medical attention. He also just sat and listened to evacuees who had been through a traumatic experience and needed to talk. Knowing that more help was needed, he recruited fellow Berkeley students: he put out the word through the Cal Veterans' Center and the School of Public Health that volunteers were needed, and he asked Berkeley Social Welfare to send out an email to alumni asking for MSWs to volunteer their time. These efforts earned the Cal Veterans' Group the Chancellor's Public Service Award in Spring 2018.

In November 2018, Smith was invited to speak at a UC Regents' meeting focused on the experience of student veterans. In addition to describing some of the highlights of his experience at Berkeley and stressing that the campus was welcoming to veterans, he used his time to recommend that the Regents and the UC Office of the President support more effective collaboration between UC campuses and the Veterans' Health Administration through the development of a memorandum of understanding.

Since then, he has continued to be involved in conversations around improving services for UC student veterans. Smith partnered with the director of the San Francisco VA Student Veteran Health Program, fellow Berkeley Social Welfare alum Keith Armstrong (MSW '84), to bring VA healthcare to UC campuses. In mid-September, the San Francisco Veterans Affairs Medical Center, in partnership with the Cal Veteran Services Center and the UC Office of the President, brought VA healthcare to UC Berkeley. Student veterans were able to enroll in VA healthcare, get an ID card, learn about eligible services, learn how to use VA telehealth on their smartphones, schedule appointments for primary care and mental health, and meet with a doctor. This rollout was the first of its kind in the U.S. Similar events and increased services are planned for UC Hastings, UC San Francisco, and UC Davis in the coming year. Smith's advocacy has helped to make a difference for thousands of student vets.

"When a veteran has a support system in place, they have a higher graduation rate and completion rate than their civilian counterparts." 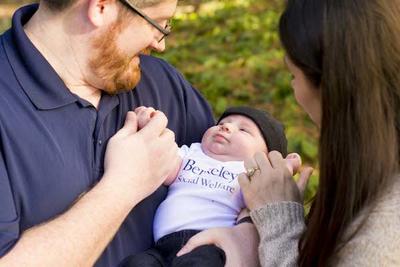 His MSW field placement currently has him providing mental health counseling through the VA in San Francisco. He describes his supervisor, fellow Berkeley Social Welfare alum Nicole Muller (MSW '08), as "amazing" and devoted to improving the lives of the veterans she helps. Additionally, he describes the placement as "one of the best you can get."

Smith is just months away from the goal he has spent the last seven years working towards, and he plans to continue his focus on mental health services for veterans after graduation. But these days, Smith has another major priority in his life: his first child was born in September. "Occasionally, you have to look back and see where you've come from. Soon after my baby was born, I finally got to lay down that night and I remember thinking how grateful I am for everything that I have. I'm grateful that I'm able to be here, coming to this school. I'm really grateful that I'm able to help other people. And I'm grateful that I got help and that I didn't follow through on suicide because I wouldn't have been able to experience all these awesome things."