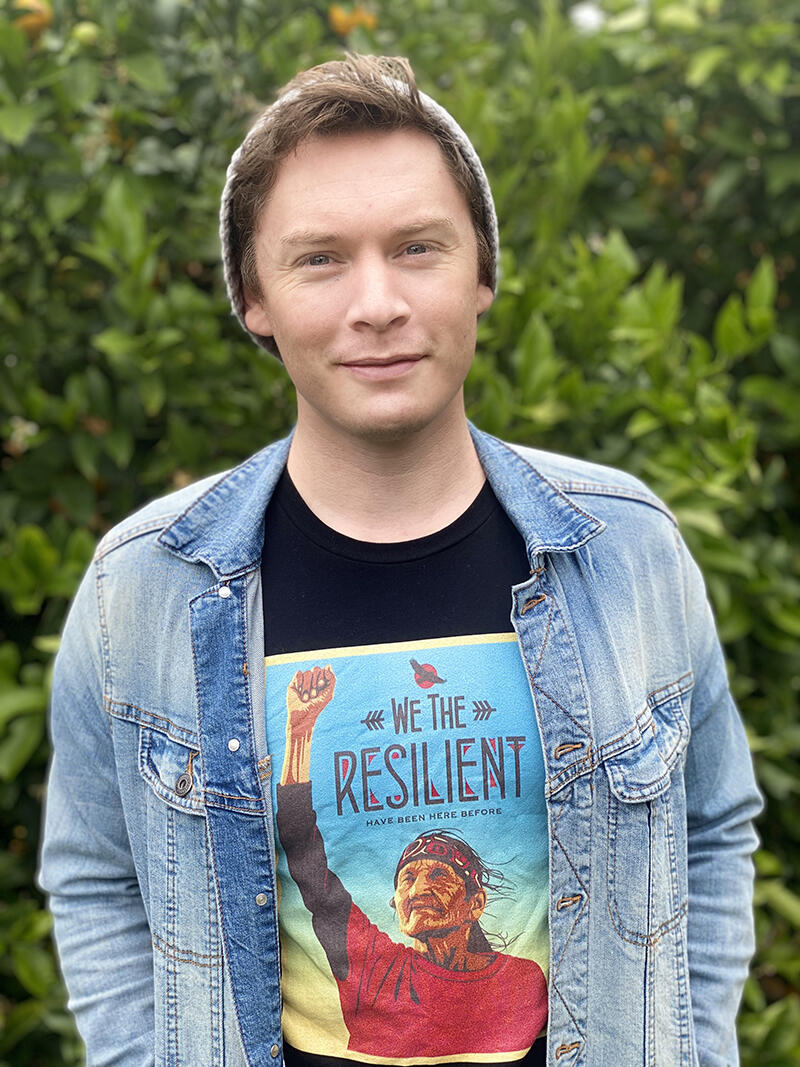 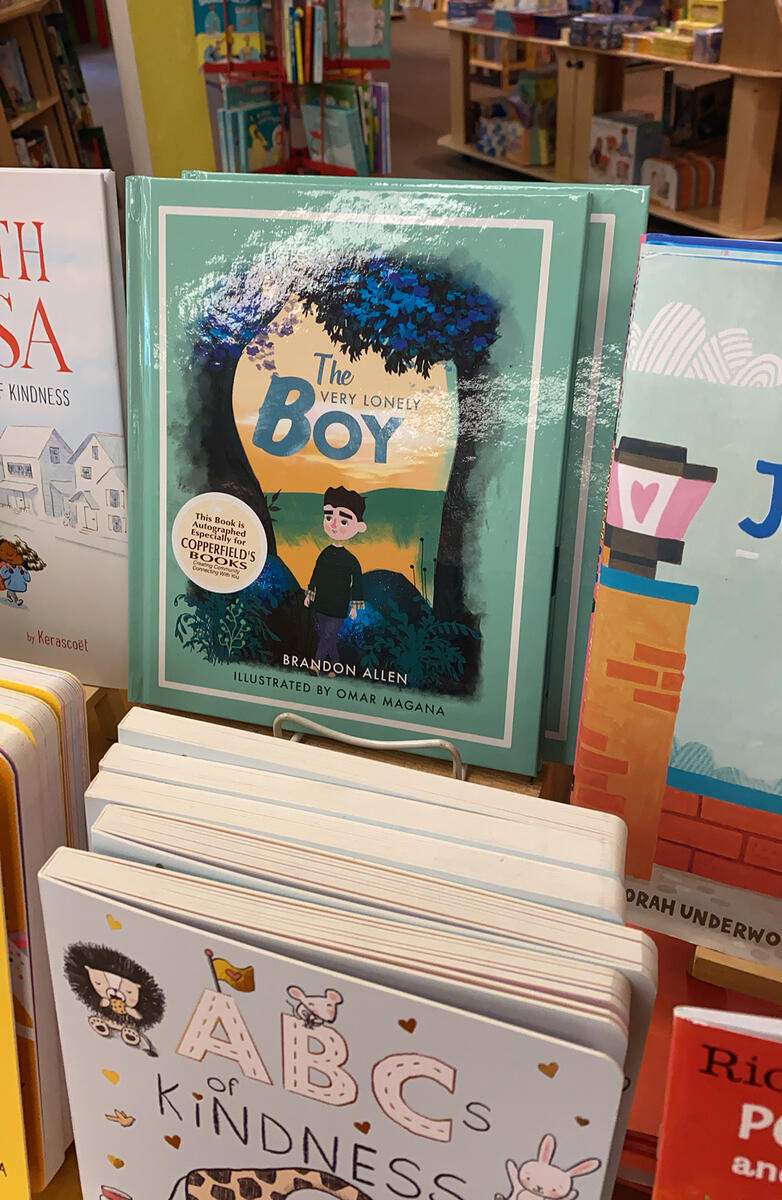 Copies of "The Very Lonely Boy" on display in Copperfield's Books in Petaluma.

Brandon Allen (MSW '20) graduated this past May, and two weeks later his book The Very Lonely Boy was published. We talked to him about the evolution of his project, the importance of giving children a framework to talk about difficult emotions, and his career as a school social worker.

Interview edited for length and clarity.

Tell us how your book came about: how the project got started and how it evolved.

It's kind of a funny story. I had moved from my hometown to Chico. One day, I was sketching some sketches on a pad and they sort of inspired me to put words down, and then this story sort of came out.
It's very related to how I felt at the time: I had come out of the closet, I had been ostracized from the religious community I was involved with prior to coming out, and I moved away from my hometown. So the book is all about a sense of feeling lonely and looking for connection somewhere.
The emotions are based on personal experience in my childhood: going outside and feeling lonely, then climbing a tree, connecting with nature, and feeling less lonely in nature than I did in my own house surrounded by people.
At the time I had no intention of creating a book out of it. I had half the story done, and I started showing it to my friends and their reaction was, "this is amazing. What happens next?" So eventually, I had to finish the other eight pages, and my friends loved it and encouraged me to publish it. That was about nine years ago. And then a year ago, I decided to try and have the book published because I cared so much about the character and the story. So I did some research, figured out how to do it, and then made it happen.

You're a California Native and a member of the Mechoopda tribe. Does that inform the story in any way?

That comes out in the boy's connection to nature itself. It ties in to my native cultural beliefs: the boy goes into nature to feel less lonely, and it is nature itself — as opposed to a person that supports him — that helps the boy feel less lonely.
There's not anything that overtly says this is an Indigenous story and I don't think there needs to be. I think being an Indigenous/Native author makes this an Indigenous/Native story. But, I will say that It's less of a cultural story and more focused on loneliness, and a boy's way of coping with loneliness. With that being said, it was still important for me to include where I come from, who I am, and who my people are, which is included in the author's section towards the back of the book. Having a published author is something that we as a tribe can be excited about.

Obviously social welfare as a profession has both helped and harmed native communities. Do you feel that the weight of that history informs your perspective as a social worker?

Jill [Duerr Berrick] had a class where she talked about native children being taken from families by social workers and things like that. That's directly related to the story of my grandfather. He won't read my children's book because it literally gives him a flashback to his experience of running away with his brothers from a boarding school that they had been taken to. They literally ran away from someplace in Oregon to get back to their family in Yreka. This was 60 or 70 years ago and I don't know exactly what was happening at the time, but part of the story was that their mom felt like she couldn't take care of them or was convinced that she couldn't.
So that informs my social work practice and how I work with people: recognizing that everybody's trauma looks different, and historical trauma is a thing, and you don't know how it impacts a person from day to day.

At the same time, your book illustrates a pretty universal experience.

I thought about taking gender out of it, but it was important for me to include boys specifically because of how historically it wasn't okay for men to show emotions. To be masculine meant not to cry, not to have emotions. It's so important that we teach boys and men that it's okay to talk about feeling lonely, and reach out and ask for help.
One of my goals is to eventually have it translated in Spanish and then have it be available for monolingual Spanish speakers too. Next year!

What are some of the reactions that you've gotten — especially from children — since the book has come out?

Really positive reactions. I actually haven't been able to interact with too many kids due to the pandemic. My hope was to be doing book signings and donating some copies to the Social Research library and the Ethnic Studies library, and none of that happened.
But before we went on lockdown, I brought a few copies of my book to my internship in Napa County, and I did a group therapy session using the book with a small group of elementary students. I asked them about loneliness and they really opened up. I also had one little girl come in for a one-on-one session; she read the book and she was so happy reading the story. She related to the story and talked about feeling lonely. After that I found out it was her birthday, so I gave her a copy of the book and she was just ecstatic.
I've also had some parents message me either on NextDoor, or Instagram or Tiktok and say, "it was really great for me to be able to use this book to talk to my kid about loneliness." Especially during the pandemic, so many people are feeling lonely and experiencing loneliness and the book is a way for parents to talk about it with their kids. It's very encouraging, getting those sorts of responses from families. I really appreciate the positive feedback.

Do you have plans for more promotion once we're able to resume in-person gatherings?

Once things are up and going I plan to do some in-person book signings and readings at Copperfield's Bookstore in Petaluma, which has one of the busier children's book sections of their stores. And the same thing at the Barnes and Noble in Santa Rosa. And the exciting thing is the book is now available online at Target and Walmart as well as Amazon and my publisher, Mascot Books.

As a recent alum, could you tell us what drew you to pursue an MSW and what led you specifically towards the PPSC credential and social work in schools?

That's a layered question. I think one of the one of the things that drew me specifically towards getting my master's degree was how limited I was just having a bachelor's degree. I had reached my max position at the agency that I was working at, and I wanted to continue to move forward. Having a master's degree was going to give me opportunities to grow my career, to grow professionally, and to do the things that I really wanted to do.
And I chose school social work because every time that I have tried to get away from schools, I wind up right back in them. So finally I decided to just go and work in schools. I've been doing school social work for six years, including my time at Berkeley and my previous job. I love school social work, specifically, because this is early intervention. Even high school is still an early intervention prior to adulthood. And you get to actively see how you're impacting a student on a day-to-day basis, whereas in individual private practice or client-based work you see clients once a week or every other week and that's it. In schools I can see students every single day in the hallway and I'm an integrated part of their community, which I love.