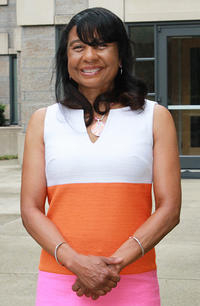 Professor Linda M. Burton has been named the next dean of Berkeley Social Welfare. Currently the James B. Duke Professor of Sociology, and previously dean of Social Sciences and director of the Center for Child and Family Policy at Duke University, Burton will bring extensive leadership experience and her reputation as a preeminent scholar on child welfare and poverty to the role.

Selected after an extensive national search, Burton will begin her term on September 1, 2019.

"Berkeley's search committee for the School of Social Welfare dean position was immensely impressed with Professor Burton's wealth of administrative experience, inclusive and collaborative leadership style, expertise in mentoring, and commitment to social justice in both her university service and academic work," wrote Chancellor Carol Christ in a statement released today. "We have no doubt that she will lift Berkeley's School of Social Welfare — already one of the nation's best — to exciting new heights, ensuring that it contributes as much as it can towards building a more caring, equitable, and just society."

Burton served in a broad range of leadership roles in her time at Duke. As the dean of Social Sciences, she was responsible for handling all matters relative to 239 faculty members in 14 departments and programs, including African/African American Studies, Economics, History, Political Science, and Women's Studies. During her time as Dean, she simultaneously co-directed the undergraduate program on International Comparative Studies, was co-chair of the university's Task Force on Bias and Hate Issues, and served as the only dean (along with two university attorneys and a university vice president) on the university's union bargaining team in negotiations with the Service Employees' International Union (SEIU) on behalf of Duke's adjunct professors.

Prior to joining Duke, she was a faculty member at Penn State for over 20 years and served as director of its Center for Human Development and Family Research in Diverse Contexts from 1998 to 2006.

Linda Burton is a renowned ethnographer who specializes in "big science" longitudinal studies of family dynamics that exist among America's poorest urban, small-town, and rural multigeneration families. Amidst her administrative service, Professor Burton has maintained a prolific research record. Her research integrates ethnographic and demographic approaches is incredibly wide-ranging: She has examined the intimate relationships that low-income mothers enter into, complex family structures across space and time, the careers and pathways open to African-American men and boys, the accelerated life course transitions faced by poverty-stricken children, adolescents, and adults, and much more. Her research projects are typically vast in their scale; one of them saw her direct a team of 215 ethnographers and analysts as part of a three-city study of urban poverty, family processes, and child development. She was also principal investigator of a longitudinal multi-site team ethnographic study (The Family Life Project) of poverty, family processes, and child development in six rural communities in two states.

Burton brings along a successful history of garnering federal and foundation grants as well as competitive national fellowships. She has served as an editor for several scholarly journals and recently co-edited The Oxford Handbook of the Social Science of Poverty and Black Boys and Men in African American Families. She has served a as member of agenda-setting committees for the Institutes of Medicine, National Research Council, National Academy of Sciences, National Institutes of Health, National Science Foundation, and national and international Boards.

Burton has received numerous awards and honors over the course of her career, including the Distinguished Career Award for the Family Section of the American Sociological Association, the Alexis Wiley Award for Outstanding Research in Family Science, the Family Research Consortium IV Legacy Award, and the American Family Therapy Academy Award for Innovative Contributions to Family Research. She is a fellow of the Gerontological Society of America and president of the Sociological Research Association, an international honor society for distinguished sociologists.

Raised in Compton, California, Professor Burton holds a bachelor's degree in gerontology and a master's and doctoral degree in sociology, all from the University of Southern California.

Burton has a well-demonstrated commitment to mentorship, having mentored, sponsored, and trained Minority Fellows in the American Sociological Association for 35 years, as well as students, staff, and faculty from Historically Black Colleges and Universities around the country. She also led the National Institute of Mental Health-sponsored African American Mental Health Research Scientists Consortium and the Multisite Research Training Program in Diversity and Family Process.

Dr. Burton looks forward to taking the helm at Berkeley Social Welfare: "From the moment I set foot on Berkeley's campus and entered Haviland Hall I knew with great surety that this was where I was called to be. There is a community here filled with brilliant caring people who are connected by the DNA of social justice, innovation, a commitment to investing in others, and doing their best work to anchor social programs, public policies, and social change in ways that matter most. Life and the chance to fulfill a greater purpose doesn't get much better than this. I am absolutely thrilled to join the School of Social Welfare and the UC Berkeley family!"

As dean, she will strive to build an infrastructure that leverages collaborations across departments and programs and works hand-in-hand with the community to have a positive impact on meeting the needs of organizations, families, and children.

"I am so excited for the School," says Jeffrey Edleson, who has served as dean since 2012 and will return to the Berkeley Social Welfare faculty after a sabbatical. "Professor Burton is a world-renowned scholar in child welfare and poverty and a very well-regarded administrator at Duke. This promises to be a great next decade for our School."