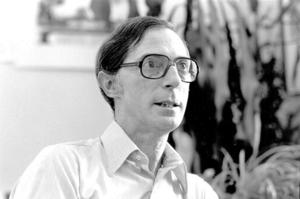 Harry Specht, dean of the School of Social Welfare at Berkeley since 1977, died at the age of 65 on Sunday, March 12, 1995. His death followed a struggle of several months with cancer of the throat. His loss has left a deep wound in the School and on the Berkeley campus.

Harry was born in New York City in the year that signaled the beginning of the Great Depression, a time that shaped his character and his vision of the role of government in alleviating human need. His childhood was a lesson in poverty and family distress; he practically raised himself as he and his siblings, fatherless and with a very ill mother, fended off the omnipresent threat of foster care. Social workers were a constant in his developmental years; sometimes as objects to be feared but, more often, as people who could provide some semblance of succor. He was deeply involved in the settlement houses of the City, especially Bronx House, a refuge in winter and a pipeline to summer camp when, in his teenage years, he became a counselor.

Harry somehow found the strength simultaneously to support himself and to earn an AB in English at CCNY (1951). His affinity with the profession of social work--and particularly the specialty of “group work” — impelled him toward professional education. He went on to obtain an MSW. (1953) at Case Western Reserve University in Cleveland. It was there that he met Reva, a fellow social work student who became his wife and the mother of his two sons, Daniel and Elliot.

His early professional years were immersed in the group work movement and his vita resounds with the names of the great and famous settlement houses of New York City: Bronx House, Lenox Hill, and the Mt. Vernon YM-YWHA. Among other population groups, he worked with street gangs and, in a more benign vein, Harry became one of the noted square-dance callers of the settlement house and community-center universe. In the early 1960s he returned to graduate school and obtained a PhD from Brandeis University in 1964. This signaled Harry's entrance into the world of academia — of disciplined inquiry, of research, of writing. It also provided a brief but meaningful detour into the War on Poverty, declared by Lyndon Johnson almost at the moment Harry received his degree.

Immediately after Brandeis, Harry went to work for one of the important experiments of that war — Mobilization for Youth on the lower east side of Manhattan. Although Harry had published as early as 1957, it was out of the Mobilization for Youth experience that he wrote his first paper that earned him a national audience: “The House on Sixth Street” [Social Work, v. 10, 1965 (with Francis Purcell)]. This was to be the true beginning of a national and international scholarly reputation that grew in stature over the next 28 years.

In 1964, Harry and his family moved to California where he became associate executive director of the Contra Costa Council of Community Services. A one-year stint as lecturer at the San Francisco State College Department of Social Work was followed by his appointment, in 1967, to the School of Social Welfare at Berkeley. He rose from lecturer through the professorial ranks and was appointed dean in 1977, following the retirement of Milton Chernin.

This dry recitation does not begin to tell the story of Harry Specht — a man of great depth and complexity. He was, first, a devoted husband and father. Dan and Elliot were always puzzled as to how their father could have been so adept at fatherhood given the lack of a paternal role model. Reva's long bout with cancer and her death revealed a facet of Harry that was not immediately apparent to those who did not know him: he was absolutely heroic in his concern and tender caring.

Harry was a teacher who gave of himself. He would spend hours with his doctoral students and was generous beyond any reasonable expectation. Students may have found him demanding; they may have seen him to be opinionated; but they never saw him as boring. He was a provocative teacher in the positive sense of that word. He insisted that his students have ideas of their own, take positions and, above all, think! Towards the end, when he was sorely weakened by cancer, Harry still worked diligently over his students' final-examination papers, meticulously commenting on the merits and shortcomings of the submissions. It was a testament to his responsibility and dedication.

He was a scholar. More than a dozen books and over 50 papers are just one part of a vita that contains scores and scores of reports and conference papers. The book he wrote with George Brager, Community Organizing (1973), was a landmark in the field and remains one of the fundamental texts. Another book, written with his colleague Neil Gilbert, Dimensions of Social Welfare Policy (now in its third edition and with a third colleague, Paul Terrell, 1993), represents a milestone in the literature on social policy. His final book — his most controversial and most immediately influential, Unfaithful Angels: How Social Work Has Abandoned Its Mission, with Mark Courtney, 1994 — was the one that delighted him most. In it, Harry takes to task the profession of social work for abandoning its historical mission of service to the poor. The list of scholarly work is long, noted for its cogency and, most importantly, for the pervasive influence his writings have had on the practice of the profession and the nature of social-welfare education.

Harry's ideas were often unsettling but they were always stimulating and influential, and in the end, the persuasiveness of his argument usually prevailed. In testimony to this influence, Harry achieved an international reputation and several awards: a Senior Fulbright Scholar (1973); the Daniel S. Koshland Award — California's most prestigious prize in Social Work (1991); the Presidential Award for Outstanding Leadership in Social Work Education (NASW, 1992); and the Berkeley Citation, the campus' highest honor, bestowed on the occasion of the 50th Anniversary of the School of Social Welfare (1994).

His tenure as dean brought the School of Social Welfare recognition as one of the foremost graduate Schools of Social Welfare in the world. Harry Specht's leadership is directly responsible for the achievement.

He was a scholar, an educator, an administrator; he was a father and husband; he was a teacher. Most of all, he was a decent and jovial human being who brought life and scintillation to those around him. He was a familiar figure on campus with his jaunty, even audacious hats. He loved thrift shops; he loved to travel; he loved to talk and chat.