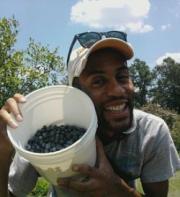 For Aaron Cadore (MSW ’12), making an impact in the social-work field doesn’t necessarily mean following a single, pre-determined path. His interests in the profession lie precisely at the intersections of direct practice and administration, as well as the nonprofit and for-profit sectors.

As an undergraduate pursing an English degree at Berkeley, Cadore was very active in public service, first working with an Oakland-based legal clinic specializing in family law, followed by a position at a worker’s rights clinic and an internship with U.S. Congresswoman Barbara Lee (MSW '75).

After graduating in May 2009, Cadore accepted a position with a national disability legal firm in Los Angeles. Once there, he made the decision to pursue social work on the level of direct practice. “I thought that there was more to what I wanted to do than just assist individuals and families in a legal capacity,” he says. “I felt that with social work I’d be able to develop more unique tracks for individuals.”

Despite this, Cadore also realized the benefits of the work that he was doing.  “My work with a disability law firm in Los Angeles really opened my mind up to some of the advantages of for-profits and the idea that non-profits and government do not always have all the answers,” Cadore explains. "I thought, ‘Wow, you can help people, and still be in the for-profit sector.’”

This experience led Cadore to the realization that contrary to traditional ideas about the profession, social work and the private sector can be not only compatible, but successful. It is with this viewpoint he made the decision to pursue a graduate degree in social work. In researching the various programs across the United States, he discovered the federally-supported Title IV-E, which provides educational funding to qualified family welfare professionals to work in child protective services. After meeting with School of Social Welfare field education consultant and Title IV-E program coordinator Catherine Ralph, Cadore decided to pursue his MSW at Berkeley. “Cathy encouraged me by explaining that the field needs more well-rounded social workers with a diverse set of experience, and that mine were no exception,” he says.

After completing his first year in the MSW program, Cadore spent the summer in New Orleans with the nonprofit agency Kids Rethink New Orleans Schools, or “Rethink.” Sponsored by Cal Corps’ Magnolia Project, Cadore’s summer work focused on empowering inner-city middle- and high-school students through social media. Rethink’s initiatives for this past summer revolved around childhood epidemics – particularly childhood obesity and diabetes – and the School-to-Prison Pipeline.  Through developing and leading summer lesson plans, Cadore worked with a group of 25 youth – dubbed the “Rethinkers” – who hailed from various neighborhoods of the city.

Cadore’s main project focused on increasing parent involvement, including going door-to-door to meet each Rethinker’s family, where he discussed the goals of Rethink and extended personal invitations to the program’s annual potluck event. “The executive director of the program told me that this type of outreach had never been done before and that it was very fitting for a social work student,” explains Cadore.  “Direct interaction is crucial. When parents get to see a face, it makes a difference. Not only did it have the result of bringing more Rethinkers and Rethink parents out to this specific event, but it encouraged the organization to make an even harder push to connect with Rethink families.  Rethinkers can only be as engaged as their families."

In addition to interacting with students and parents through Rethink, Cadore simultaneously coordinated the trip for seven undergraduates involved in the Magnolia Project. The process of overseeing numerous projects, combined with his prior internships and service experiences, have influenced Cadore to pursue an administrative career in social work. “I don’t want to be an administrator who is removed from direct practice,” he notes. “I feel like administration is where you can make some of the most impact. What is important is to prioritize that impact and at the same time have it be community-driven by emphasizing the needs of those who are providing the direct service.

“I love social work and I don’t know if there’s really any other degree that will better prepare me to work with underserved groups, which was my key motivation in coming into the program,” he continues. “However, I feel like you can make the greatest impact when you can lead others and have fewer people above you who are dictating your limitations. I realized that if you can help a whole organization do some good, through management or even consulting, you can have an even bigger impact.”

While completing his MSW degree, Cadore was also involved with the Haas Center for Nonprofit and Public Leadership. Through the business school program, he says he saw the “immense potential for the cooperation of the business and social sectors.”  Cadore also participated in the Berkeley Board Fellows program, which consisted primarily of MBA students. The program enabled him to sit as a non-voting member on the board of directors of Berkeley Youth Living with Disabilities.

Cadore notes that his diverse educational experiences molded his goals and outlook for the future of the social work profession. “My concept of social welfare has been challenged,” he says. “My idea of what the for-profit sector can do, what the nonprofit sector can do and what government can do have been challenged. I’ve been be able to see these different perspectives.”

At the same time, says Cadore, realizing the different perspectives can be “tough.” “You want to side with one, or you become frustrated by the limitations of one,” he explains. “But if you can see the good in all of them -- and the shortcomings, too -- I think that you can have something really outstanding.”