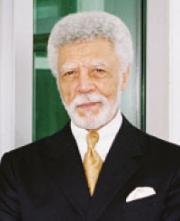 Former Oakland mayor Ron Dellums (MSW '62) grew up on Wood Street in West Oakland, attended Oakland schools and graduated from Oakland Technical High School. After graduating from San Francisco State University, Dellums attended the School of Social Welfare at UC Berkeley in 1960-62.  He then worked as a psychiatric social worker for the California Department of Mental Hygiene, directed programs in Bayview/Hunters Point and served as the director of employment programs for a Bay Area consulting firm.

He began his career as a politician in 1967 at the Berkeley City Council and in 1970 was elected to the US House of Representatives, where he served 28 years representing Berkeley, Oakland and the surrounding areas. He was known for his expertise on military policy and was a leader on environmental, labor and consumer issues as well as civil rights. Dellums became Mayor of Oakland in 2006. He shared his thoughts about his time at the School.

What was your area of concentration when you were getting your MSW at the School of Social Welfare at UC Berkeley?
I received my Masters Degree in Social Welfare, with an emphasis in psychiatry. I wanted to become the black Sigmund Freud.

What were some of the highlights of your experience at the School?
It's impossible for me to pick just one. My time at Cal was one of the best experiences of my life and truly prepared me for my future. After I graduated I was eager to get out and help my community. I took the State of California's Civil Service Examination for Social Workers right away. I knew there was a great deal I could contribute to new treatment modalities to better understand and help individuals manage their complex lives and cope with the various pressures that impinge upon the human condition. Having passed first among all who took the exam at that sitting, I had many job opportunities at sites throughout the state. I chose to work in Oakland, with clients from the type of neighborhoods throughout the city with which I was so familiar.

How did the education you received inform your career as a politician?
I believe the combination of my upbringing and my education have allowed me to not get caught up in the cynicism of the moment. I learned that active involvement with other human beings can change the course of events. You can't buy into this overstated notion of cynicism that things can't change; that things are the way they are and that is it. I believe, thanks in part to my education, that the extent to which you opt out of the process and become an arm chair spectator, you allow your cynicism to deny your need to grapple with necessary change. Your engagement, your involvement, your participation, can change things. If there's anything that this life is trying to tell you it's that you can go in, you can fight the good fight, maintain the fidelity of your ideas, be willing to step up to the fight and engage. And you never know, you may just change the world.

What important lessons did you learn in your life as social worker that helped you be a better politician?
As a social worker, I learned how to be a better member of the human family, period. As a black man, I understood fully that many of the obstacles that individuals face during their lives are social and structural — some especially arduous, such as racism — rather than personal. On the other hand, I knew from my own life that personal issues and struggles had at times derailed me from the path of success that my parents had tried to keep me on. With my education and training providing a professional overlay to my childhood and adult experiences, I had come to believe that by listening, paying attention and appropriate intervention I could help people to better cope with the various factors that affected their lives.